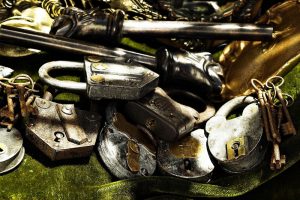 The Early Days of Locks

In today’s world, antique locks are mostly items that hobbyists use for esthetic value as opposed to function. Back in the day, though, their use had more significance than simply being a collectible.  The story of locks and keys started a millennia ago when our ancestors recognized the need to keep their valuables secure.

Initially, there were no locks to speak of; a person would safeguard his possessions using some type of knot. As humanity progressed, a simple lock consisting of a wooden post that slid across a house door came into existence. This was effective in keeping doors locked, but only from the inside.

Ancient Egyptians invented the first pin tumbler locks, which used the same wooden beam concept with a wooden key that you could use to open it from the outside. The beam had a set of pins fitted inside vertical slots inside it, which a key could lift up to unlock the door. Romans improved on the idea by devising locks forged from metal, often bronze or iron. Those Antique locks often featured animal images, such lions, dragons and bulls to guard against evil spirits. 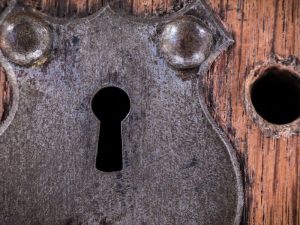 Although dating back to ancient Roman and Chinese civilizations, warded locks were a novelty at the time. Ward locks remained popular until the early 20th century when the more secure lever tumbler locks started to replace them.

History accredits the Chinese with the creation of the first portable padlocks, which were commonly made of iron. The padlocks found their way to Europe through trade. Being one of the most popular locks in history, people favored padlocks because they were less expensive than conventional door locks. They also could secure anything from cupboards to jewelry boxes.

Through the ages, a vast number of locks went in and out of fashion for different reasons. Although humanity progressed since the wooden beam days, locks had no significant improvement right until the onset of the industrial revolution. There are simply too many types of locks to cover, however, here are some of the most popular ones in history. 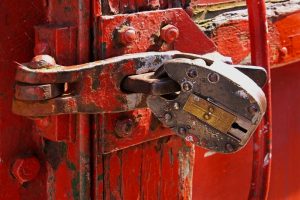 Warded lock: One of the oldest in history, this type of lock used obstructions, or wards, in the keyway. Notches on the key blade correspond to these wards, allowing the right key to rotate freely inside. Although popular at some point, this type of locks offers little protection as a skeleton key can easily unlock several ward locks.

Padlock: Christopher Polhem, a Swedish engineer, invented the forebear of the modern padlock in the early 1700s. The lock had an iron body with a series of metal discs inside. The lock would open only when the discs aligned in the “Unlocked” position.

Lever tumbler lock: Robert Barron, an English Locksmith, invented a double acting lever tumbler in 1778. As the name suggests, this lock relies on lifting levers to a specific height in order to unlock it. The lever has slots that correspond to notches on the key. This type of locks is still in use today mainly as a door lock. 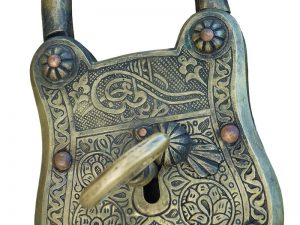 Antique locks are quite fragile, the passage of time means that those security devices have had their fair share of wear and tear. Moreover, many older locks were forged from iron, a metal that can easily corrode over the years. Whether it is furniture, cabinets or doors, a good idea is to let a professional handle your vintage lock. A skilled locksmith can restore, repair and even duplicate your antique lock without the risk of damage.

Although the skills and techniques required have mostly vanished in modern day, a specialist uses tools, parts, as well as their craftsmanship to refurbish or reproduce the locking mechanism. Those craftsmen can even recreate components of the lock that are hundreds of years old. A DIY might sounds like the cheaper, more convenient option but it is ill-advised.

Some people still keep antique keys for sentimental reasons, such as old locks that belonged to close family member. On the other hand, collectors have been seeking those vintage items for hundreds of years as a pastime. Whatever the case may be, it is often prudent to maintain those locks in good condition. Need another reason?  Locks enthusiasts have paid several hundreds, even thousands, of dollars to purchase some of those collectibles.

Antique Locks: Now and Then

Nowadays, people use antique locks as decorative items or collect them as a hobby. However, a limited number of those vintage locks are still used in low security application to this day. Additionally, A few museums have some of those old locks on display.

Locks have been around for thousands of years serving as means to secure our possessions. Granted, the early locking mechanisms were far too simple by today’s standards but the made way for the modern versions.  Due to the continuous evolution of mankind, a significant improvement in locks design, function and security has taken place.

With varying success, those security devices have deterred theft, sabotage and vandalism for thousands of years. Locks are now a crucial ingredient of security systems worldwide, giving means of protecting residential buildings, warehouses and vehicles among other applications.

The modern lock now incorporates security measures and devices, such as magnetic chips and fingerprint recognition. This rapid progression of technology has made it nearly impossible to pick some of the high-end locks. The journey of the lock surely has not ended yet, and we can only wonder what the future holds for the centuries old lock.

How would locks look and function in the days to come? Time will tell.

To speak with one of our team at Broadway Lock and Key regarding your antique lock in the Denver Metro Area, contact us using the form below: